TexGen is open-source software licensed under the General Public License developed at the University of Nottingham for modelling the geometry of textile structures. TexGen is a modelling pre-processor for textile simulations for a variety of applications including textile mechanics, permeability and composite mechanical behaviour. It can be used to model a range of textiles such as woven (including complex 3D woven structures), braided and knitted. With over 45,000 downloads since 2006, it is widely used by both academia and industry. 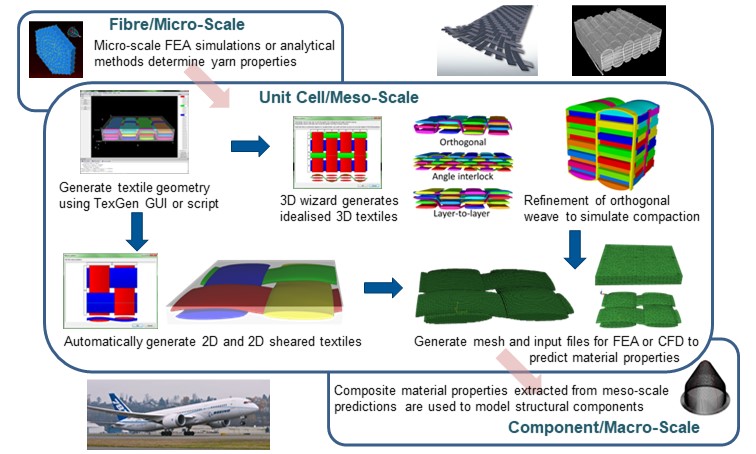 The software can be used both via a user interface and a Python scripting API. Developed within the Composites Research Group at the UoN it is typically used as shown above but has been designed to be flexible so that a wide range of textile forms can be modelled.

TexGen requires the Python interpreter to be installed in order to run (currently still Python 2.7 in order to retain compatibility with ABAQUS). The standard installation package named texgen-3.x.x.exe does not include Python and requires Python to already be installed. The bundle installation package, texgen-bundle-3.x.x.exe includes the Python interpreter as part of the package

For installation on Linux or to build the code on Windows, you can download the source code from GitHub.

A series of webinars are available as training material, including an introduction to creating textile models using TexGen and how to export these models for simulation.